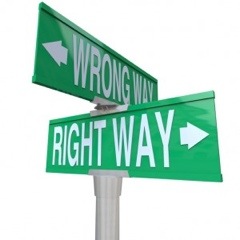 Among the things I find frustrating about autism is that it makes it difficult to attribute reasons for trying behaviors.

Ryan has some behavioral issues that are very obviously related to his diagnosis, such as his inability to control his voice volume and his difficulty breaking out of rigid habits. I wish we could say we always responded to these behaviors with compassion and reason, but at least we both know the cause.

Other behaviors are much more difficult to decode, and therefore much more frustrating. Both Veronica and I believe strongly that we need to instill discipline in Ryan precisely because he is mildly affected by autism and we know he can behave appropriately in public settings. But we also don’t want to nitpick at him constantly over relatively minor things that are difficult for him to control. It’s a fine line. There are times when he looks at us defeated and we know we have to let things go — it’s a matter of picking our battles.

On the other hand, a traditional action/consequence approach to discipline, such as limiting a favorite activity or taking away a favorite toy for a time, does sometimes produce positive results.

The tricky part is figuring out which behaviors he can control, and are therefore worthy of discipline. Sunday afternoon we decided to take a family walk in the hour before the Devils’ second-round opener against the Flyers. It was a beautiful day out and Ryan actually really enjoys walks if you can break him away from whatever indoor activity — typing standings, playing NHL2K on Wii — he is engaged in. Riley wanted to ride her bike so we decided three of us would walk while she rode ahead.

Things didn’t start well. Ryan was pushing just about every button I have. He kept using his favorite word (“sucks”) loudly despite repeated, and increasingly annoyed, requests to stop. He kept walking on people’s yards and not the sidewalk. When I pulled him aside to talk to him about these things, he was defiant. He muttered something about his parents that included his favorite word. I didn’t take it particularly well. I reminded him of a lengthy conversation we’d had about this same topic just a few days earlier, one that ended with him apologizing and admitting he didn’t know why he continued to challenge our authority on this topic.

Yesterday, he wasn’t so contrite.

“Dad, I only told you I’d stop cursing so you’d take me to Bring Your Child to Work Day,” he told me.

For this, I had no answer. Ryan doesn’t really lie — that would get into a gray area and he prefers the world in black and white — so I knew he was telling me the truth. Still, it hurt. I dropped back and let him walk ahead, preferring to stew by myself at the back of the pack.

Very quickly our family walk had turned into four individuals. Riley was riding ahead on her bike, while Veronica, Ryan and I were spread out and not talking to one another. Veronica needed to step in to do something to rescue the outing.

We try to act as each other’s better half in these situations. When one of us is down or boiling over, the other steps in to calm things. It’s one of the ways we keep each other sane. She reminded me that walking on lawns is just not something he can control and to let it go. And as for his response about the cursing, she found the bright side. He was being manipulative, which is a more advanced form of social thinking. In other words, progress.

We stopped for a drink at the turnaround point and all promised to make the return walk better, which it was.

As I watched Ryan drink his water, and refuse to speak because a bug might get in his mouth while he was swallowing, I became more and more disappointed that I had let such little things derail our family outing.

Ryan Is mildly affected by autism, but it still presents him with so many challenges to navigate each day. As his parents, our role is to guide him through those challenges. Yes, that includes discipline, but we can’t let it get to the point where he lashes out in frustration over all the rules we have asked him to follow.

If someone could just invent a device that told me when Ryan is doing things he can’t really control, and when he’s just choosing to be a pain in the rear because he’s an 11-year-old boy and well, that’s kind of an 11-year-old boy thing, life would be so much easier.

Until then, it is our job to know when to step in, and when to let go. It’s an ongoing struggle, but at least we have each other for advice.

4 thoughts on “Knowing When”