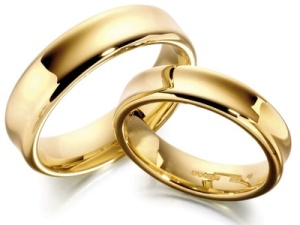 Fourteen years ago today, I made the best decision of my life when I married Veronica.

I knew from the first day we met how compatible we were. We met in a sports bar during the NCAA tournament, and one of our first trips together was to see a Michigan football game. We honeymooned in New Orleans, where she accompanied me on a tour of the Superdome and tolerated me checking in on the Capitals during the first round of the Stanley Cup Playoffs.

A few weeks after we were married, we took a weekend trip to Washington for a playoff game. We saw the Capitals clinch their second-round series, and I saw my wife become a hockey fan. I caught a puck that was about to nail Veronica. That puck, and the ticket stub, sits in a case on my desk to this day. Little did either of us know that day the role the sport would come to play in our lives, but that ticket stub marks the beginning of the journey.

Our compatibility extends beyond sports, of course. We complement each other in so many ways. When there is a storm in our lives, one of us always able to remain calm. We are strong where the other is weak. We wrote practically the same things in our anniversary cards to each other today.

Autism has been a part of our lives for almost 10 of those 14 years. I could not imagine facing it without her by my side.

I know there is much debate as to the impact on a marriage of having a special-needs child. I don’t know whether the often-cited divorce rates are accurate. I can only speak to my own situation, and that is this: If our marriage hadn’t been strong to begin with, I can easily see how the pressures of Ryan’s diagnosis and early developmental difficulties could have caused cracks.

But we were lucky. We had a strong foundation. We we able to pick each other up during those first terrifying months. We retreated somewhat from friends and family, battening down the hatches to deal with this new crisis. When we were ready to be more open about Ryan’s issues with those immediately closest to us, we did so with a strong, united front — so important when everyone’s well-intended reaction is “he’ll be fine.”

I don’t know if autism has made our marriage stronger, because it was already strong. I believe it has allowed us to not get wrapped up in trivial things which can grow into bigger issues. It has allowed us to take immense joy in little victories, and to lean on each other for support in trying times.

There is no one on earth that understands me as well as Veronica does, and that probably does have something to do with autism. When I first started writing about it and wanting to get involved in the autism community, Veronica was not quite ready. But the point I tried to make to her was that finding other people — even total strangers or professional athletes — dealing with the exact same situation was such an incredible source of comfort. These people understood us in ways that even our closest friends and relatives could not. Today I see Veronica exchanging emails with one of my blog readers with a hockey-obsessed child on the spectrum and I know she too feels that comfort.

I have so many blessings in my life. Two wonderful children. A comfortable home. A rewarding career. Health. Security.

But the list starts with my beautiful, incredible wife. None of the triumphs in my life would matter as much if I could not share them with you. Happy anniversary, my love. Here’s to another 14 years — and many beyond that.

Now what do you say we kick them off by watching some playoff hockey?