Do not go gentle into that good night,
Old age should burn and rave at close of day;
Rage, rage against the dying of the light.

— The first verse of the famous Dylan Thomas poem

we’ve all been given a gift tonight: at least three more days of hockey season. #treasureit #becauseitsthecup

We wanted to make them jump on a plane and come to New Jersey. We had to go anyway. Might as well get a game over there.

— Devils goaltender Martin Brodeur, on making the Kings come back to New Jersey for Game 5

No, this hockey season will not go gently into that good night. The Devils raged against the dying of the light, finding the will to fight back and keep their — and by extension, my family’s — improbable season going.

And as my friend put it, it is a gift. A gift of one more Saturday night at the Rock, as the Devils’ Prudential Center arena is more commonly known. A gift of knowing that even if the Devils lose, my kids will get to cheer them off the ice, then see the most famous trophy in sports, the Stanley Cup, presented. And if they win? They’ll have the same chance they had Wednesday night in Los Angeles — to win one game on the road. Do that, and suddenly it’s back home for Game 7.

But I’m getting ahead of myself. Just like Martin Brodeur, I had to get up and fly cross-country no matter whether the Devils won or lost Game 4. Might as well get a game in.

No, we won’t be together in the seats, as I will again be working at the game. But here, another gift. At Game 2, my extra ticket went to a college buddy who flew in from Michigan for the day. Even though he’s a Kings fan, it meant we got the rare opportunity to spend a few hours together. At Game 5, my ticket will go to Aunt Mary, Veronica’s sister (and a frequent commenter here).

Because she reads the blog and because she loves her sister and her niece and nephew, she has been following this Devils run vicariously from several hundred miles away. I’m not sure if she’s ever been to a hockey game before. But I know a convert when I see one. She was texting both Veronica and me throughout Game 4. Veronica threw it out there that she should consider driving up for the game on Saturday. I loved the idea and encouraged her to come. Her final text of the night, sent long past midnight and just a few hours before she had to get up for work, was “I am coming! Once in a life time … soo excited. Getting a jersey tomorrow!”

Excited doesn’t begin to describe Riley’s state of mind after the game. She had fallen asleep on the couch but was awoken by Veronica’s excitement after Patrik Elias scored to give the Devils their first lead of the series. As soon as the game ended a photo arrived of Riley and her N.J. Devil doll, beaming. 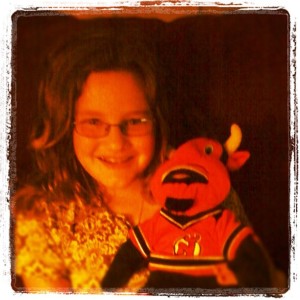 Ryan had gone to bed nervously when the game was still scoreless. Veronica reported that she’d woken him up to tell him the result and he responded, “Yes! We get to go on Saturday!”

The Devils have truly been amazing this postseason. They are not the most talented team. But they have a will of iron. When things go wrong, they just go back and work harder. And because I’ve had like two hours of sleep and am half-loopy as I write this post from 35,000 feet somewhere over the great plains, I can find parallels between the way they play and how we tackle the adversity that autism throws our way.

Autism has its ups and downs, but you don’t get time to stay in the “woe is me” mode for long when things don’t go well. You can feel pity for a minute, but then it’s time to get back on the horse and start finding new solutions. You have to get off the mat and keep battling. Do that consistently enough, and something good is bound to happen.

When Ryan was having such a terrible time with his ears this week, we thought about keeping him home from his class trip. By morning, he was on the bus and on the way to enjoying the day with his classmates. When his anxiety over not being able to play street hockey before Game 2 threatened to ruin the night for everyone, Veronica found a way to distract him (ongoing apologies to Barry Melrose apply).

In the very first round of the playoffs, the Devils blew a 3-0 lead and lost Game 3 against Florida to fall behind in the series 2-1. They got off the mat to trounce the Panthers in Game 4. They blew a 2-0 lead in Game 6, but won in overtime. They blew another 2-0 lead in Game 7 on the road, but won in double-OT. Against the Rangers in the Eastern Conference Finals, they blew a 3-0 lead in Game 5 on the road but rallied to win. They did the same thing in Game 6, finding a way to win in OT after giving up a 2-0 lead. Nothing went right in the first three games of the Cup Final. They lost two games in OT and were blown out in the third. In Game 4, they finally got a lead, only to have the Kings tie it a minute later. They just went back to work, and skated off with a 3-1, season-saving win.

That is resilience. That is, as both Veronica and NHL Network’s Darren Pang put it within seconds of each other, “gumption.”

(Aside: I believe my Kentucky-born wife now qualifies for Canadian citizenship.)

Resilience. Perseverance. Gumption. Effort. Will. A refusal to accept the circumstances you’re dealt without doing everything in your power to change them.

These are all qualities that we need to figure out how to give our kids a road map to navigate the tricky waters autism has put in their way. They happen to be the same qualities you need to get your name engraved on the Stanley Cup.

I knew there was a reason I loved this game, this team, this time.

It will not go gently into that good night.

3 thoughts on “Not Going Gently”